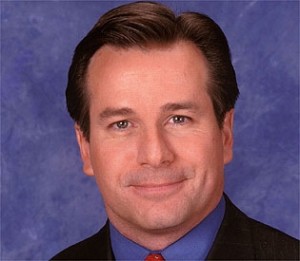 Bob Halloran has been a television anchor in New England for more than 25 years and is currently the weekend news and sports anchor for WCVB-TV Channel 5 in Boston. Halloran is also a former ESPN anchor and former columnist for espn.com.

“Irish Thunder: The Hard Life and Times of Micky Ward” is a biography that was helpful in the writing of the upcoming movie about Micky, “The Fighter”. The movie stars Mark Wahlberg, Christian Bale, Melissa Leo and Amy Adams. It should hit theaters December 10th.

Read the book before you see the movie!

Bob was paid and will be credited in the movie as a “technical consultant”. “Irish Thunder” was used, and Bob was interviewed by the screenwriter, Scott Silver, as Scott researched Micky’s life. The book follows Micky out of the tough streets of Lowell, Massachusetts and into the tougher world of boxing. Micky’s triumphs and failures are chronicled along with those of Micky’s brother, Dickie Eklund, who spent 4.5 years in jail for armed robbery and crack addiction. When Dickie was released from jail, he trained Micky and helped him reach super-stardom and a junior welterweight championship. Micky is loved by fight fans around the world for his tenacious, never-quit style. He’s a fierce competitor and a gentle human being.

“Breakdown: A Season of High School Football, Gang Warfare and the Coach Who Policed the Streets” is a “Friday Night Lights” of the inner city. Released in August, “Breakdown” is the story of a Gang Unit police officer coaching the Chelsea High School football team in Massachusetts. The players tell of their involvement in gangs, fights with machetes, friends who were shot and/or killed, finding dead bodies, and more optimistically, their efforts to find a better life.

Meanwhile, the coach, Jimmy Atkins, tough-loves the kids out of jail cells, off the streets and toward high school graduation. It’s an amazing story with several surprising twists.

Find out why the kids’ futures are more hopeful than the coach’s!

“Destiny Derailed” is Bob’s first book about the 2003 Boston Red Sox. The year is detailed with humor, analysis and essays from spring training right through the devastating disappointment in the Bronx. It’s a wonderful companion piece to any book about the 2004 season.

“Irish Thunder” and “Breakdown” are available in most major bookstores, and all of these books are available at Amazon.com. Or you can look for Bob’s next book signing.

Keep coming back to nolongermiserable.com for updated blog entries and information.

And when that championship was sandwiched between two New England Patriot Super Bowl victories, ... read more